Crocodile Bay Resort, Cost Rica:
One of Our Own; One of the Finest

This outdoor writer, naturalist and ornithologist is new to the North Texas Chapter of Safari Club International, but I’ve been a loyal member of SCI and the greater hunting community much longer. I have been an avid sportsman since I was old enough to tote a rifle, shotgun or fishing rod; hunting and fishing is an integral part of who I am. And at a critical juncture of my youth, when dad, Lt. Col. W.W. Stainkamp (USAF, Ret.), was stationed in England in the 1950s, I developed a keen interest in birds. What’s Wrong with This Picture? Contrary to conventional wisdom, hunting and the love of nature go hand in hand. Just check out the life of one of America’s finest – Teddy Roosevelt. But to the antis, hunting and a love of nature are diametrically opposed. Go figure. I still get a kick out of telling my tree-hugger friends, “The great birders, men like John James Audubon, shot birds to make study skins as visual aids for his paintings.” They don’t want to hear it. For them, any killing is anathema. 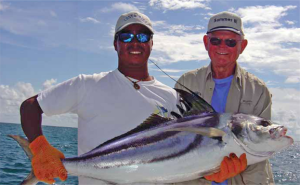 In the Beginning I got into outdoor writing after years of slogging through the corporate trenches, writing and editing the range of public relations and business communications, from media copy to marketing prose for large government proposals. So it was no surprise to friends and loved ones that, after 30 years, I set out to do that which I love most–hunt, fish–and write about it. Now I write and ghostwrite (for others) books, hunting journals and magazine articles, and I find it infinitely more rewarding than 70-hour-work weeks! When I met fellow North Texas Chapter member Larry Shanks, Director of Fundraising for Orvis-endorsed, Crocodile Bay Resort in Costa Rica, I was eager to learn about the many colorful birds and animals found there, in the south of the country.

Getting There A number of airlines fly from D/FW to San Jose, Capitol of Costa Rica. I chose old friend and Dallas-based American Airlines. My four-hour flight went flawlessly with a meal and movie served enroute. Customs was a breeze, and before I knew it I was there. San Jose is a bustling Central American city with incredibly bad traffic. I chose that metropolis as a jumping-off point to the outposts of the Caribbean Coast, Puerto Viejo, and Crocodile Bay Resort in the south. To get around, rather than risk vehicular madness or worse, I chose short, in-country hops aboard NatureAir (www.natureair.com). The preferred mode of travel to Crocodile Bay is propjet, and my NatureAir flight was a comfortable 50-minute hop over some of the most scenic countryside in the world.

Something For Everyone God surely created Costa Rica with the adventure traveler in mind. From the biggest couch potato to the most daring thrill seeker, there is something here for everyone. From zip lining through verdant, jungle foliage – to blue-water kayaking; fine dining; beach or poolside lounging; rainforest combing; mountain biking; surfing; dolphin and whale watching; to horseback riding on miles of pristine beaches – Crocodile Bay has it all. World-class fishing, Eco touring and the range of indescribably therapeutic and relaxing massage and spa treatments are just the icing on the cake. Crocodile Bay is situated on 44 acres of idyllic gardens, fronting the shimmering Pacific Ocean. A private, 850-foot pier connects the grounds to moorings for more than 40 boats (e.g., 17-foot flat boats, 24-foot center consoles, 27-foot offshore, center consoles, 33-foot strike tower boats and the owner’s 35-foot strike tower boat).

Flowering trees, vines and shrubs sport magnificent flowers year ’round, and butterflies and neon hummingbirds flit from one nectar-filled, aromatic blossom to the next. In the afternoons, I left my sliding glass, upstairs door open, and one afternoon a pair of birds – a hummingbird, followed by a wren – flew inside the room briefly.

Each morning, I awoke at 5 a.m. with the rising sun, and I was greeted by a raucous chorus of scarlet macaws feeding in the almond trees outside as a troupe of white ibis glided effortlessly across the manicured lawn below in search of insects. Together with Crocodile Bay’s expert naturalists, I scoured the surrounding countryside for birds, and in just two, half-day trips, I recorded roughly a quarter (75) of that area’s diverse bird life. (My list of birds follows this article.) For great color images of Costa Rica’s birds, some of which migrate as far north as Texas and beyond, I recommend “The Birds of Costa Rica, A Field Guide” by Richard Garrigues and Robert Dean. As luck would have it, I had lunch with Richard in San Jose, prior to setting out on my adventure at Crocodile Bay Resort, and I found this soft-spoken American expatriate to be a charming and imminently knowledgeable birder

What to Bring Dress casually in Costa Rica, and pack light. Shorts, short-sleeved shirts, T-shirts and sandals are the order of the day or night. Don’t forget a collapsible umbrella, insect repellant, sunscreen and sunglasses. But if you forget your umbrella, don’t despair…Crocodile Bay Resort supplies ‘loaner’ umbrellas free of charge…and repellant and sunscreen are available (along with a host of cool souvenirs) in the Gift Shop. A good English-Dictionary is helpful, but not a necessity. Birders should definitely pack a good binocular.

Exchange Rate The exchange rate in May 2008 was 500 colones to one American dollar. A 10,000 colones note is the equivalent of $20 American. Don’t be surprised when merchants hold your paper money up to the light; counterfeit currency here is common. The Country Costa Rica is sandwiched between Nicaragua, Panama, the Pacific Ocean and the Caribbean Ocean. Its 19,000-plus-square-miles is covered in rainforest and jungle. With only one percent of the world’s landmass, Costa Rica accounts for five percent of the world’s biodiversity. This Eco-friendly country is the size of West Virginia, 100 miles wide by 200 miles long, with four million citizens. Per capita incomeis $12,000.

When to Go Any month except October – when the lodge is closed for maintenance – is good to visit Crocodile Bay Resort. Enroute, I like the Hotel Grano de Oro in San Jose, but Crocodile Bay will make arrangements to put you up at any one of several fine hotels. * For bill fishing, the months of December through March are best. * For bird watching, I like March through May, but any time of year is good.

Accommodations The air-conditioned rooms at Crocodile Bay Resort are luxurious and spacious. Each has a pair of queen-sized beds with a private deck. Each is uniquely decorated with local, hand-carved woodwork, and many have a private Jacuzzi. Laundry is picked up daily, and for storing one’s valuables, each room has a safe.

The Spa Crocodile Bay’s serene beauty is a calming influence, but its range of spa and massage treatments in its delightfully aromatic, 5,000-square-foot luxury spa are guaranteed to take the edge off any weary traveler. This outdoor writer wasn’t all that enthused about Crocodile Bay’s Hot Chocolate, Hot Stones Massage and Chocolate Body Wrap, but the 45-minute Angler’s choice is just what the doctor ordered!

Birdwatching & Eco Tours Osa Peninsula is home to more than 300 species of resident and migratory birds. I was fortunate to have hosts Alberto Herrera Calvo, Eco Tour Assistant Director, Dennis Atencio and Marcelino Perez as guides fo two half days of birding and eco-touring. Together, my hosts and I observed 75 unique birds (see Costa Rican Bird List). The preferred mode of travel to Crocodile Bay is propjet, and my NatureAir flight was a comfortable 50-minute hop over some of the most scenic countryside in the world. Ornithologist and new south Texas friend Tom Langschied, down ingsvilleway, tells me my list features 20 specimens that can be seen in his neck of the woods. But the other 55 I saw while I was there had Tom “quite envious and salivating at the thought of what is possible…(Crocodile Bay Resort)…definitely seems to have some very, very good potential for birders…a place more people need to learn about.” I couldn’t agree more, Tom. From the woodpecker-like Plain Xenops to the pervasive Orange-chinned Parakeets and Cherrie’s Tanagers, the numbers of brightly plumaged birds I saw on my trip – both on my Croc Bay tours and flitting about the grounds – was breathtaking. And this amateur birder could not have asked for more qualified English-conversant guides.

Osa Peninsula has all four species of Costa Rican monkeys; I saw three – the squirrel, spider and white-faced; I heard the howler or Congo monkey on many occasions. Hearing one of them for the first time will make the hair stand on your neck. At the time of this writing, I had been home a short time, and I had time to reflect on my Central American odyssey. My trip was a once-in-a-lifetime adventure I hope to repeat again real soon. The country is a nature lover’s dream, the people are friendly and the staff at Crocodile Bay Resort could not have been more professional, conversant or friendly. And the food and accommodations at this Orvis-endorsed destination! It will have me singing Crocodile Bay Resort’s praises for years to come. Maybe you’re in need of a little R&R… perhaps some birding and fishing? If so, pick up the phone and give Larry Shanks a call 1 (800) 733-1115, ext. 113.

I promise: You’ll be glad you did.