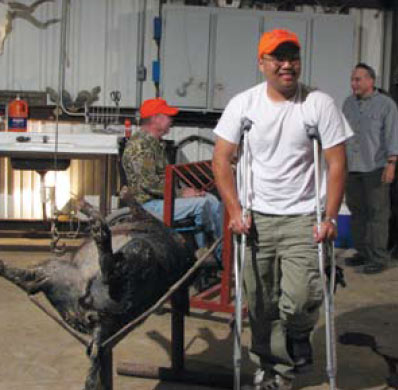 On March 10-11, 2007 the Armed Forces Foundation (AFF) and Texas Youth Hunting Program (TYHP) teamed up to co-sponsor a feral hog hunt on the Stasney’s Cook Ranch near Albany, Texas. Hosted by Johnny and Debbe Hudman, the three wounded Marines and two soldiers assigned to Brooke Army Medical Center (BAMC) in San Antonio arrived at the ranch headquarters Friday afternoon. A TYHP volunteer picked up the five Vets, recently wounded in Iraq, Friday morning and drove the group to Cabela’s in Fort Worth where they were feted and treated to a shopping trip by the store manager. After lunch the entire hunting party of Veterans and volunteers from TYHP, headed by Gene Roush, rendezvoused at the Stasney’s Cook Ranch.

After a round of hand shaking and “Howdy Dos,” the entire party dug into a huge supper prepared by TYHP volunteers and Debbe Hudman. Satiated, everyone told a few yarns and then adjourned to the bunkhouse for a good night’s rest before the big hunt. Several of the young hunters commented that they were far too excited to sleep and the noise and laughter from the bunkhouse confirmed their predictions.

Scanning the mesquite they spied a large hog moving toward an opening in the brush. When it stepped out into full view Jeff fired and the hog bolted into a tangle of brush and cactus. They waited for about twenty minutes and decided the hog was down for good.

Rising before dawn, something the Vets were accustomed to, brought a few groans and complaints from the volunteer guides and assistants. Some staggered into the spacious great room of the lodge, but a cup of hot coffee, some juice, and a pastry or two revived most of the participants. Finishing off the light breakfast the party divided into teams, grabbed their rifles & ammo, loaded into trucks, and bounced off down the pasture roads to their blinds.

Friday evening was almost beatific, with little wind and wildlife parading around the ranch, easily visible from the lodge’s patio. Saturday morning, however, proved the vagaries of West Texas weather, with a strong northwest wind blowing and a smattering of clouds skittering across the sky. Only a few hogs wandered out of the mesquite, and these a sow with a litter of little sucklings, no shooters in the bunch. They did, nonetheless, spot several whitetail deer and tom turkeys just beginning to strut in anticipation of the spring mating season. Alas, all the hunters returned to the lodge without a hog, but a repast of large breakfast burritos somewhat assuaged their disappointment.

Groaning from full bellies the hunters and most of the volunteers, displaced to the improvised sporting clay range, set up near the lodge. Most of the young Veterans had not previously tried this sport and were very enthusiastic, soon commencing a Marine vs Soldier contest. The results of the competition remain a bit clouded however, just depends on which team you ask. Whatever the outcome, smiles and good humor abounded among all the participants. 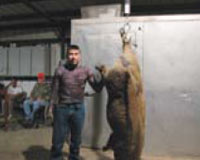 Saturday afternoon’s hunt proved vastly more productive. Several hogs meandered out of the brush and the hunters took full advantage of the situation. Three of them downed a 277-pound barren sow, and two boars weighing in at 125 pounds and 95 pounds.

The best stories came from Jeff Srisourath and his guide, Don Coxsey. Jeff related that he almost did not come on the trip because he believed it was impossible for him to hunt hogs on crutches. Then, when he arrived at the ranch he was assigned a guide in a wheelchair, which Jeff thought was an unintended cruel joke. After his weekend hunting experiences, however, Jeff’s attitude changed completely. He told Don, “I had a great time and would be happy to hunt with you anytime, anywhere.”

To while away the time, as hunting partners are wont to do, the two chatted about their sundry life experiences. Jeff related that his family was originally from Laos, and that his father fought with the Americans against the communist North Vietnamese who invaded Laos during the 1960s. Jeff flatly stated, “The reason I enlisted was because American soldiers came to help us fight the Communists and, as an American, I wanted to help the Iraqis fight for their independence.” 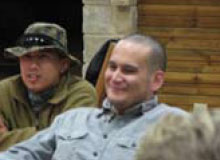 An eruption of grunts and squeals interrupted their conversation. Scanning the mesquite they spied a large hog moving toward an opening in the brush. When it stepped out into full view, Jeff fired and the hog bolted into a tangle of brush and cactus. They waited for about twenty minutes and decided the hog was down for good.

Jeff, on crutches, and Don in his wheelchair cautiously moved out of their blind and along a road toward where the pig had disappeared. Rounding a bend they spotted another sow and litter of pigs foraging along the road. The two froze. If the new arrivals saw the hunters and raced helter-skelter through the brush they could frighten Jeff’s hog if it was only wounded. The pigs continued to root around the road, indicating they had no clue as to the nearby humans.

While Jeff and Don watched the pigs in the road, a large wounded sow staggered out of the cactus. Now they had a problem – how to shoot. Don held Jeff’s crutches crossed as a rest while Jeff leaned against Don’s wheelchair and tried to level his rifle on the sow. She reeled behind some brush and they had to shift positions to get a clear shot at the big porker.

Trying to protect his injured foot, Jeff hopped on his good foot carrying the rifle and one crutch. Don had to remain in place so as not to alert the other group of pigs. Jeff managed to bunny-hop where he could see the sow, balanced on one foot, while he used his crutch for a rest, and drop the sow with a shot to the head. Jeff and Don laughed about their antics and claimed they probably looked like the Keystone Cops on a hunting trip.

Saturday night, after a wonderful meal of lasagna, everyone recounted their stories of daring-do, wandering off to bed one by one, realizing that the next morning meant the end of a wonderful weekend. Rising about 8 a.m. Sunday morning the party quartered the pigs for processing, packed their gear, and clambered aboard the van for the trip back to San Antonio. Watching the crew from BAMC vanish in a cloud of dust, the volunteers looked around saturninely, then grinned broadly at one another and said almost in unison, “Let’s do this again.”