May 2006 Jack and Ginger Walker traveled to Speckboomberg in the Eastern Cape, near Cradock, South Africa home of Tam Safari’s for a darted white rhino hunt. Jack has decided to dart his square-lipped rhinoceros with a bow and arrow and on this trip would use a bow supplied at the ranch. Speckboomberg proprietors are Irvin and Therese Tam, professional hunter and son Peter, along with partner Henriette Grobbelaar who oversee a quality growing safari ranch operation on three properties that not only includes the white rhino, but other animals not typically encountered on your South African safari, like lions, red lechwe, water buffalo, and roan. A complete selection of typical plains game is also available for the first timer or even the most seasoned hunter; challenges abound. 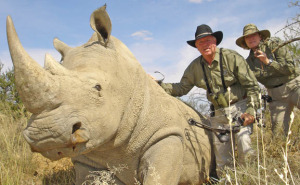 After 24 hours of traveling, shuffling, and cramping it is great to stretch out in quality surroundings and accommodations. Getting our legs back included taking a mountain reed buck, cape eland, cape bushbuck, cape kudu, and then practice ensued with a weighted arrow to simulate the loaded dart which is screwed in place of a broad head. First shots at 10 yards were low and sight adjustment made, 20 yards more adjustments, 30 yards, more adjustments, after a couple of hours and lots of looping shots we are ready to dart a rhino. Joined by the local veterinarian, yes this is required in the darting game, seems all tranquilized rhinos are cared for, samples taken, and antidote given by a registered professional, we are off to confront a rhino.

Locating a mature bull takes some doing and horse back riders are dispatched with intent to lend aid in sightings. Once a trophy has been located and evaluated, a plan is made, remembering wind and shot placement, in the big muscle (shoulder or rump), and an approach is attempted. Our first stalk saw the hunting party number five, Jack, Ginger, Peter, Dr. Vet, and tracker Elwyn. Doomed from the start, our quarry was holed up in some very thick brush. Even if we had not made a “freight train connections” worth of noise, there was no way to place an arrow through this brush. At 30 yards you can definitely hear a rhino pass gas and swish his tail, close enough you think he might hit you with it, right before he exits into the wind. Somewhere along the way I do remember thinking, “stepping behind a bush or tree” is a small substitute for a backup rifle which we do not carry on the expedition.

Our second stalk ended up much like the first. A small twig snap at 35 yards sent our prey streaking out of the brush like a rocket. We regrouped, decided only Peter and I would attempt any further “sneaks,” leaving Ginger, Doc and trackers with the land cruiser. Hours later another “Ceratotherium Simum Simum” is located. Tracking into the wind, at a hundred yards, Peter motions to sit down, pointing to my feet he indicates for us to take off our boots and socks. My rhino is in a small opening in a creek bottom. Our approach catches him looking into the wind, exposing a huge target. Going in barefoot is not only quieter, but slower. You watch each step placement as everything in Africa either bites or sticks you. Rhino’s at fifty yards are huge, at forty yards massive, at thirty yards a 6000-pound boss, and at twenty-one yards an adrenaline rush you never experienced before. Preparing the shot was automatic, a huge target exposed and an arrow locked in flight are forever frozen in my mind. At impact there is a loud “pop,” the 22 blank is initiated in the dart, its gases expanding, driving the plunger in the dart forward, thereby injecting tranquilizer in the rump of my trophy. “This is the first time I have ever shot an animal in the butt on purpose,” goes through my mind as three tons crash through the brush, and are lost from sight. Fortunately, Peter has placed out riders on either side to follow our prey as loosing a tranquilized rhino is unacceptable. Amazingly, I found out later, Mr. rhino comes out of the bush and follows our land cruiser track. This route takes him right by the unsuspecting observers and Ginger videos my rhino the entire 10 minutes it takes the serum to work.

Once my rhino was down, work is quick, drops in the eyes, a fist sized glob of cotton in each ear (dampen noise), blood drawn, mouth swabs taken, antibiotic shot given, horns measured, photos taken, and a antidote given in a vein behind the ear. Water is poured on the animal for hydration as the 30 or so minutes he is down a rhino does not sweat, and this must be done quickly as the awakening is about a minute away. Watching from a distance, in the relative safety of our cruiser, my trophy “gingerly” raises, looks around as to say, “What just happened?” and trots off, gold medal and all. An experience Ginger and I will never forget.

By the time we leave I also added a caracal, black springbok, zebra, greysbok, and blue duiker to the trophies going home while the ever elusive, vaal rhebok will give us reason for a return trip. Irvin, Therese, Peter and Henriette run a quality safari business, are great hosts, and provide a super safari experience. If you want a quality challenge try a bow and arrow hunt for a “barefoot rhino.”